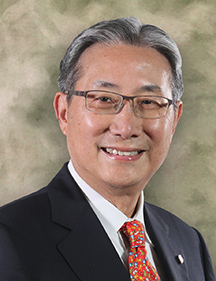 Professor Leong is currently Chairman of the Hong Kong Hospital Authority, President Emeritus of the Open University of Hong Kong, Emeritus Professor of the University of Hong Kong and Honorary Professor in its Departments of Orthopaedics & Traumatology, and Biochemistry. With 50 years’ experience in teaching, research and university administration, he has attained significant achievements in higher education. In addition, he has thorough knowledge of the education development in Hong Kong, mainland China and the surrounding regions.

Professor Leong is an internationally renowned clinician-scientist specializing in spinal and pediatric orthopaedics. He served 38 years in the Department of Orthopaedic Surgery of the University of Hong Kong, of which 23 years as Chair Professor and Head. He was elected Dean of the Faculty of Medicine for two terms of 3 years, from 1985 to 1990. He was President of the Société Internationale de Chirurgie Orthopedique et de Traumatologie (SICOT) from 2002-2005, the world orthopaedic association established in 1929 in Paris and incorporated in Brussels, presently with 105 member nations. He is the first Chinese to head the association. In 2001, Professor Leong was elected an Academician of the Chinese Academy of Sciences, the first clinician in Hong Kong to receive the honour.

Professor Leong was appointed JP in 1993, awarded the OBE in 1996, and received the SBS in 2009. He also received the 2011 Leader of the Year Award (Education/Research category) from Sing Tao News Corporation Ltd. He was conferred Doctor of Science, honoris causa by the University of Hong Kong in 2011 and by the Open University of Hong Kong in 2014. In 2015, he was conferred Honorary Doctorate by the Hong Kong Academy of Performing Arts.

Presently, he is Chairman of the Consultation Panel of the West Kowloon Cultural District Authority. He is also a member of the International Commission of the Council for Higher Education Accreditation (CHEA) in the United States, and the International Network of Quality Assurance Agencies in Higher Education (INQAAHE). He previously served as Chairmen of the Joint Committee of Student Finance, the Hong Kong Council for Academic Accreditation, Public Libraries Advisory Committee and Citizens Advisory Committee on Community Relations of the ICAC.

Professor Leong has been the Advisor of the Hong Kong Academy of Nursing since 2013 and has provided invaluable advice and insightful comments for the further development of Advanced Nursing Practice in Hong Kong.