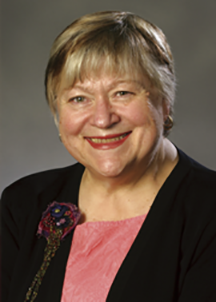 The Provisional Hong Kong Academy of Nursing has admitted Prof. Angela Barron McBride as an Honorary Fellow. Prof. McBride is Distinguished Professor and University Dean Emerita at Indiana University School of Nursing; she is also a member of the Indiana University Health Board, and chairs the board’s Committee on Quality and Patient Safety. Having wide-ranging knowledge of women’s health, psychology of parenthood and psychiatric nursing, she has published extensively and earned many prestigious book awards over the years. Along with literary awards she has been honored with many other awards, for example, Award of the American Psychological Association’s Division on Health Psychology and the Melva Jo Hendrix Award for Leadership of the International Society for Psychiatric Nurses. Prof. McBride’s years of dedication to fostering both nursing education and leadership also brought her the President’s Medal for “sustained academic excellence” awarded by Indiana University.

Prof. McBride is an active leader serving on various nursing organizations and programs in the United States. In recent years, she has focused her scholarly attention on leadership development, publishing The Growth and Development of Nurse Leaders in 2011, to help other nurses orchestrate their careers. Her generous sharing of experiences and knowledge has been instrumental in advancing global nursing practice. Hong Kong nurses also benefit from the distinguished leadership of Prof. McBride. She has been an advisor to the PHKAN since of the time when it was a preparatory committee in the early 2000s. As a past president of the American Academy of Nursing, Prof. McBride has inspired and championed the noble vision of the PHKAN to promote advanced nursing practice and the well-being of the people nurses serve.